Inland China: Over the Hills and Far Away

Our journey in China has taken us through the Mountain roads of Yunnan and Sichuan province to Chengdu, known for having the biggest panda breeding centre in the world.  After some time there, we took an overnight train to Xi’an.  For the next month or so, it’s all BIG CITIES!     The Mountain roads were in very poor condition, but we’re in no real rush so we thought we’d go for it. In practice, we have gotten a little tired of going 30 kilometers an hour!  Fairly entertaining trips, though. If the bus had a TV, the driver either put on Kung Fu movies or Tibetan Music Videos. Lots of reading was done. The roads are terribly bumpy, winding and single lane shared with yaks, sheep and other cars. Wonderful views.  Worst bathrooms.

Once we got to the more Tibetan areas of China, there were giant mantras and Gods carved and painted into rockface.  Tibetan Buddhism was obvious after we left the first 3 day hike we did and headed north to Shangri-La.  There were suddenly Buddhist prayer flags every few kilometers.  The prayer flags are the colours of the 5 elements and when those are in balance, its a symbol of health and harmony.  The flags themselves are meant to spread blessings and compassion to the world when they blow in the wind. It is also not uncommon for Monks to be walking down the street, sitting down to eat at the same restaurant as us, or talking on their cell phones. Our drivers always had pictures of Gods or Buddhist leaders posted to their vans, while careening into the passing lane around a blind corner.
Tiger Leaping Gorge
Tiger Leaping Gorge tops all of the lists of things to do/see in China. It was a gorgeous 3 day trip, even though I had a cold! Hiking in Yunnan province was awesome in a lot of ways: One major perk was that we only had to bring our small packs, as there are guest houses along the way.  That meant we could get a hot shower (in most cases 🙂 ), water refills and a few meals.  We loved this pace- no need to pre-book anything and we just showed up, paid cheaper prices than in the city, and carried on our way!

Visiting this National Park in China was a chilly stint for us, since the altitude meant colder climes and even snow.  We stayed at least 2-3 nights in cities along the way for every 500 metres gained in altitude, so were able to avoid altitude sickness.
China is similar to New Zealand in that the buildings aren’t built with insulation or heaters so when it’s cold your best bet is to turn on the bed warmer and crawl in.  Helpfully though, the Chinese don’t drink cold drinks so there’s always a kettle in your room.  Even ill-equipped busses can have a little hot water fill station.
We hiked as high as 4000 metres (13 000 feet), all to set our eyes upon Kawa Karpo, which sits at 6700 metres- only 5000 feet lower than Everest!  We hiked for 4 days in that area, which is part of the Himalayas.
My lacklustre attitude on the first day must have shown, since we were in the company of a “kettle” of 20 Himalayan vultures for the better part of an hour!  (Yes- when in flight, these vultures are called a kettle. I Bing‘d it.)  Other than that, we saw plenty of yaks and mules, only hearing the sound of their bells on the mountainside.  No one else crossed us on that long, dusty village path that day.  Even more mules once we got to the National Park and their respective owners were tempting tourists to unload their bags onto them, or ride them to the top of the pass.
“Mei you”
This is the very special Chinese phrase that always makes me cringe.  “Mei” is a negation, and “you” (pronounced yoh) means have.  So, “don’t have”.  Never a good answer when you’re asking about something. We get this here and there, as it’s said if someone really can’t provide was you’re requesting, or it’s said if the person would rather not explain further to us. It reminds me of standing next to a bulldozed antique market we’d travelled across the city to get to, or missing a train and asking when the next one was.
After a particularly long day (22km), we arrived in a small village called Xideng and started asking around for a restaurant. We hadn’t eaten since setting out that morning.  Went to ask at a convenience store.  “Mei you”.
So, we tried a lady standing in the street. “Can ting zai nar?”
“Mei you”.
Seems Xideng just didn’t have a restaurant. But there was no way we could keep walking.  So we changed the question and tried that out: “Where can we sleep?”
“Oh, I have a room!”
“Okay… I hungry”
“You eat noodles?”
“Yes! Two.”
$12 for the nights sleep, and $4 for 2 bowls of noodles. Funny way of getting to the resolution, but all’s well that ends well. 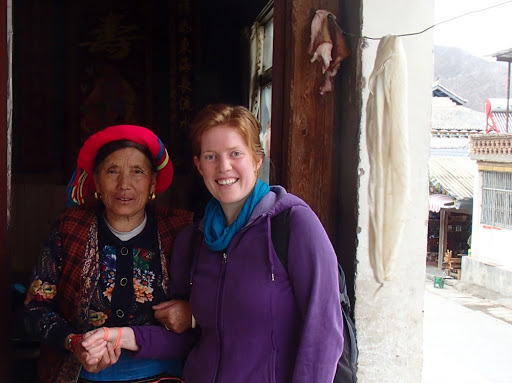 View from a Brad:
For a long time I have been on a quest to find my spirit animal.  After many years and lots of travelling I am happy to say I have finally found it:
Asia, China
LinkedIn
YouTube