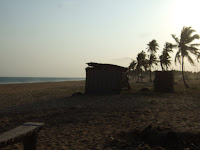 Thanks for the comments– its good to hear from whos reading.

The photo was taken at a bar on the beach in Ouidah on my first day here; the hut on the right is the bathroom… simply three walls giving you some privacy to squat in the sand!

A girl who walks me home some days while I teach her english told me that her grandmother had passed and that the funeral was this week. It was the same funeral my bosses were going to, and had invited me to. Her grandmother lived to 98, an age rarely seen in Canada let alone here where the lifespan extends on average to about 50 or 60 years!

Funerals here take a very long time to prepare for… the deceased passed July 27, and the ceremony was thursday of this week! This is because of how long it takes to notify all the friends and family of the death, and to save up money.

The church service started at 9 am, and we arrived around noon when it was finishing. It was out in the country, in a small village that I dont know the name of. After the service finished, everyone drove to the “enterrement”, which was where the lunch was held under big wedding tents, complete with a dj, three course meal and free alcohol.

There is a Voodoo spirit of the crossroads (of life and death) that transitions the mourners to celebrating the deceased’s life. The funeral procession was led by a marching band, followed up with a group of drummers, and the girl I know led it, carrying a large framed picture of her Grandma and dancing. Just as the procession was passing us, a fellow walked in the bushes and shot off a rifle which surprised the hell out of me! Haha, I was only a few feet away and didn’t see him in there, which my bosses got a kick out of.

I didnt see anyone in black (except for me…), instead all were in bright traditional clothing, and the children of the deceased wore elaborate hats so they could be distinguished. The grandchildren were serving the meal and wore separate custom made clothes for the funeral versus when they were serving. We left around two thirty, but I was told the festivities would continue until the morning!

I was talking about the funeral with Jules, who is the exchange manager and my housemate, and he was saying this is a very Béninoise way to have a funeral. He’s from Cote d’Ivoire, and says that there, funerals are very somber and no one eats. My bosses were saying that they only have a big celebration like this if the funeral is for someone who has had the chance to live: a childs death would not be so festive.