With a Dash of Korea

We’ve just finished 11 days in Korea. Our visas were ending in China, and we hummed and hawed quite a bit last month trying to figure out what to do next.  Korea was tempting as we were going to Japan anyway – I mean, one look and the map  and I could practically taste all the Korean food I wanted to try. However, Korea and Japan are some of the most expensive countries in Asia.

Ah, well. We went anyway! We’ve generally tried to avoid flying, so we took a train to Qingdao, China and caught a 17 hour ferry the next day.  Qingdao was a treat – turns out it’s where Tsingtao beer was created so all of a sudden we’re at a night market that not only has seahorse, spiders and crabs to snack on, but kegs lining the streets. Not a bad place to stop for a night.
If you look at it in terms of time vs money, the ferry wasn’t much of cost savings over flying. But the whole thing felt like a mini bonus trip… we were out on the open seas, looking at big shipping freighters, watching China sink away in the distance. The ferry was less than half full, so although we had a budget room, we didn’t have to share it with anyone else. No internet either: hella relaxin!  We now wish we were also taking a ferry to Japan, but that’s how it goes sometimes.
Our time in Korea was split between Seoul (North-West: the Capital with 20 million strong) and Busan (South-East: coastal city, 2nd biggest with 3 ish million).  I guess we had gotten very, very used to China because life’s little luxuries thrilled us for quite a while: All of a sudden, there’s ICE available!  Toilet paper in the bathrooms! Google! Most people could understand some english- though many were timid to speak it. Still, they could understand a question and respond with fingers pointing in whichever direction.

Relaxing at a Korean Jimjilbang (spa)

In China, we loved the odd foot rub or blind massage (exactly how it sounds- blind people work at exclusively blind massage therapy studios across the country).  In Korea, it’s time to spa. Koreans like to soak, exfoliate and then get a nap in.  I was keen to check it out, so I went once, twice, three times in a week!  Full access to the spa is about $10-$15 per person.
The baths themselves are attended in the buff, so women and men are split up.  You soak in a variety of bath temperatures, then exfoliate in the sauna, and repeat.  After that, it’s your pick to lie on gravel, salts, or take in some fresh air in an oxygen room or ice room (to -16 I think it was).  Theres a good dozen different relaxation and nap rooms to choose from, as well as entertainment rooms: ping pong, kids play area, reading, news. It’s a family activity to go to the spa so the weekends are busy and you can see people of all ages enjoying their weekly or monthly ritual (or in my case … every second day?).

Korean baseball is hugely popular and one of our favourite experiences while there!  We couchsurfed with 2 Korean guys in Seoul, so they ensured that we knew to ‘bring your own anything’ to the ball game.  Literally- they said some people will order delivery fried chicken to the stadium!  We picked up beers and snacks at a convenience store beforehand.  Like at any sports game, you can feel the excitement of the fans. The difference here was the sheer number of songs and chants people knew! The entire game was to the sound of fans, who have all sorts of dances and hand gestures synchronized across the stadium. There were none of the filler/promotions that happen between innings… just singing!  I think our favourite moment was doing the wave, and then it started again clearly as a SLOW MOTION WAVE, and then again as a really fast wave.  We had a blast.

We had a great couchsurfing host, Ben.  He took us around for a day to talk about Korea’s history: 45 years of Japanese colonial rule, the Korean War (to which Canada was one of 16 countries to send troops), and way, way back to the dynasties.  Ben’s working to become a tour guide, and his enthusiasm showed as we walked 19 km around the city that day!
Young men in Korea do a few years of University, and then do 2 years of either military or police service (their choice), and then go back to University.  Ben did military service and was sent to North Korea three times around 20 years ago in various diplomatic contexts (i.e. Translation) which change depending on South Korea’s leadership.
It was great to have a local host that can fill in the blanks for us: there were dozens of people in traditional clothing doing photo shoots at a palace we went to- turns out you get into certain attractions free if you dress up. We also passed a statue of a young woman sitting next to an empty seat: a memorial for the ‘comfort women’ that Japanese took by force during the war.  Across the street from the memorial, two police busses to protect the site. Beside it, a tent where someone was living- again, to protect the site. Behind the police busses? The Japanese Embassy.  Sassy move, Korea!
Anyway. I could go on and on but we’re on the plane to Osaka, Japan and I have a customs declaration awaiting my attention.
View from a Brad: Chicken and Hof restaurants are everywhere! I can’t think of a better combination! (Hof=draft beer chicken=fried chicken mmmmmmmm) 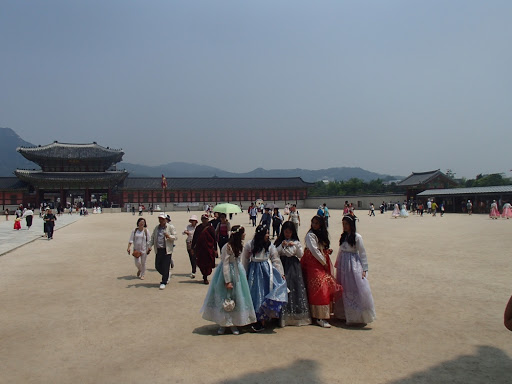