Travel in Japan: the List of Weird and Wonderful

We leave for Vancouver tomorrow- these weeks have flown by!  I’d be remiss not to write one more post about travel in Japan. This country is eccentric in every way.  For example, the picture above was taken in a photo booth, on a floor that was exclusively for photo booths. The airbrushing, eye enlargements and lip color are automatic, but it did have the courtesy to ask what shape I wanted my face to be!

Here’s a few other curiosities that come to mind…

Packaging: Everything in Japan comes in extra packaging, including people! Food from a convenience store will be wrapped 3 times, a coffee cup will be served in a bag, people layer themselves in fabric to avoid the sun, and-my personal favourite-if you try clothes on in a store, you are told to put on a triangular face cover so that your face doesn’t touch the clothes. Oddly enough, theres astonishingly few garbage cans, and no litter. Hm.

Mascots and animals: All 47 prefectures (like provinces) have their own mascot, many of them food related. Then there are the animal personalities… The funniest being the Tanuki: a mystical raccoon-like creature. He is said to be ‘cute faced, mischeivious spirit with giant testicles’, always drinking sake rice wine.

Presents: The Japanese are huge into gift giving. Convenience stores and department stores always have a section of gift boxes with sweets inside (individually packaged, of course). What’s more, every few days, someone we meet will offer us a ‘present’. We have received wind chimes, a chopstick set, postcards, origami, and most commonly, snacks.

Religious two-fer: Many Japanese practice both Buddhism and Shinto religions. Shinto is unique to Japan. One thing you see daily are the little statues, sometimes simply a big rock, and someone will have put a bib on it. In the winter, it might have a knit toque placed on it. Shintoists believe in Kami, so everything – even rocks – have a sacred essence. As one guide told me, when people are born, there’s a Shinto ceremony. When they die, there’s a Buddhist ceremony. Many are keen on having a Christmas dinner as well. 🙂 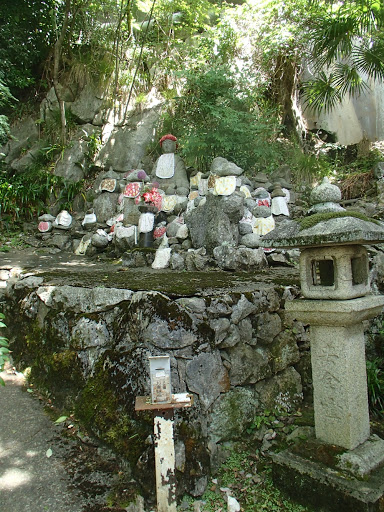 Arcades and gaming, gaming, gaming! The arcades of Japan are incredibly popular, sometimes an entire 5 story building or an entire floor of a shopping mall devoted to them. The games are of a wide variety, but what’s most impressive is the people playing them.  Arcade culture is everywhere. Subways play tunes like the ‘Astroboy’ theme, and people rent go karts and dress up like Mario/Luigi, cruising around the major cities!  We’re still kicking ourselves for not getting international drivers licenses to do this…

Izakayas: Japan has the most impressive little pubs; the one pictured below was at full capacity with 7 of us. Some of them will be standing bars, which are just as it sounds- no seats. The food served are delicious little dishes prepped behind the bar. One area, Golden Gai in Tokyo, had a few hundred izakayas crammed in, and yet it would take no more than 10 minutes to walk from one end of the district to the other!

Vending machines: You can have it all! Vending machine restaurants are very popular, and although I was skeptical at first (robots taking over and that sort of thing), I really like them.  All you do is indicate what you want on the screen, pay, and give your ticket to the cooks. It’s a huge relief when there’s a happy little ‘english’ button so we can understand what we’re ordering! If you travel in Japan’s countryside, you will also find a coffee vending machine smack dab in the middle of a country road.

Toilets: I think the Japanese have the most intense toilet experience in the world.  There are ‘shower toilet’ options as well as a sound button so that you can have a toilet themed overture play whilst you go to the bathroom. Many also have heated seats, activated by a sensor. And this is not only in peoples houses… many if not most public bathrooms have them as well!

Our hosts: We’ve been to 56 cities in the past 8 months, and the most memorable times are always where we have friends to stay with.  Two thirds of our travel in Japan has been spent with local hosts, and it’s given us an incredibly rich perspective on the country.  Thank you!

The first time Brad went to visit his friend Other Brad in Osaka, he was shown this izakaya. Here they are 10 years later with the owner, Taku.