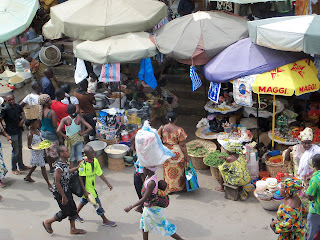 …one must first walk over the border!

Well first, one gets out of bed. If we’re talking last weekend, around 9 Friday morning, then “one” was me, volunteer Amber, and our Togolese friend Roukia who works at the house a few times a week. We each packed a bag for our weekend, and set off for Lomé, Togos capital. This is surprisingly easy- I never imagined that having no public transportation system would lend to having a very easy time getting around! We just walk to the big paved road near the market, and are immediately ambushed by men naming destinations. None of them said ours, so Roukia sticks her arm out and says “Lomé!” a car pulls over, she stealthily drives the price down to a non-“yovo” number, and sandwiched in, we’re off.

We hoped we were approaching the border when our drivers car started clicking and jerking about, and he began mumbling and tsking. We knew we were approaching the border when the road became lined with semis, vendors. Once in the driver parking lot, we re-negotiated to switch drivers on the other side of the border. Then we walked through the various check points, as officers glance at our passports. Ill admit, I was excited to be on foot, so much so that I whipped out my camera (in an embarassingly yovo fashion), and took a picture.

The policeman who immediately called me over to delete the picture was very understanding as I spluttered my way through a coctail of “desolé/je m’excuse/ohhhh…”. We continued on, smiling and nodding while the Togolese douaniers took their sweet time stamping our passports -even though for a Canadian to enter Togo I was charged twice as much as Amber (New Zealand)- rave on. Found our next driver, and had our first exciting Togolese experience: it is illegal and enforced that you can only have as many people in a car as there are seats! Also, the cars are kept up a bit better there, and some stroke of luck had us with a driver/reggae enthusiast with a cd player. Great! Lome is close to the Ghanian border, so in a mere three hours of travel (half of which was spent in Benin), we crossed almost the entire country.

Lomé is allegedly the “Paris of West Africa”, and I saw some similarities. Mostly, shopping and fashion! Togo boasts that all the countries of west Africa make the trip there to import goods back to their own countries. The markets are huge, and the amount of selection from local artisans are also varied. Togo has many leather products, most typically, vibrantly coloured leather sandals. They also have an incredible selection of “pagne”, the vibrant fabrics that you see many Africans wearing. 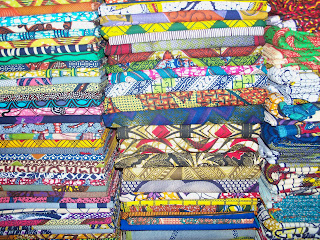 Among their markets is also the fetish market, without a doubt the highlight of the trip. This is a traditional voodoo site, protected by white magic, and it is like a pharmacy for traditional healing. Simply put, lots of dead, dried animal parts! (The big skull in this pic is a hippo) 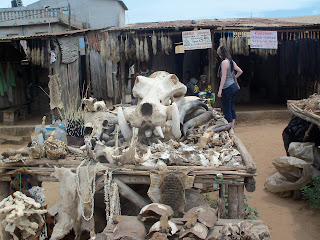 What the skulls and bones are used for is if someones sick, they consult the healer, and the healer will provide a mixture of different animals and herbs. There are key numbers…depending on your ailments it will be linked to 7, 9, or 41 ingredients (there are other numbers, but I cant remember them). Then, you go to the market, and buy the monkey skull, porcupine quills, elephant thigh, and whatever else is on your list. This is ground up into a powder, and then little cuts are made in your chest, under arms, and back. The powder is mixed with a bit of water, and put in the cuts. Voilà, your vaccine. 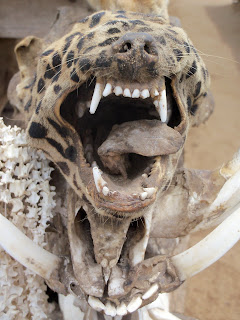 Although I have much more to say, I think Ill leave it at this for my Togo report. As always, the internet cafe is sweltering, the fans arent working, and the connection slow. Time to go!

**Credit goes to Amber as the photographeuse of these pics.