Well, here we are. Internet was down for the week, gas was- and is – up. This means I am way behind on all things internet. But due to gas, the cyber and the streets are much emptier than normal. Its strange! Gas more than tripled in a day, going from 300 to 1000 francs. The legitimate gas bars are cheaper since they’re controlled, but have become so popular that people wait for hours only to find out that there is none left. At least two thirds of the roadside bootlegged gas vendors are gone now, unable to afford to find and buy the gas to sell. Zemidjans are also much less numerous in Ouidah, and the cost of getting accross town has doubled.
I have 40 days give or take left in Ouidah. Flights are booked for the rest of the trip: to those who are curious, my feet will land in Ghana Feb 26, South Africa Feb 29, Ireland Mar 30 and Winnipeg April 16. The last three of those destinations will be alongside Brad!
In the here and now, we have two new volunteers driving the homes population to a record breaking four tenants (much more what Im used to!). Stacy is a Trinidad/Londoner here learning french for three months, and Marit is a Norwegian here for a month before moving on to study in Ghana. Jules and I complete the group, with Roukia coming and going so perhaps we can even call it a 4.5. Marit has a blog at www.smafrika.blogspot.com if you want to check it out, you can work on your norwegian as well as see a lot of photos…she posted a funny one of Jules, Stacy and I at the Fete de Voodoun January 10.
Below is another pic from that day, a pretty typical image of Revenants encircled by a crowd, blocking entire streets and intersections. Revenants are believed to be back from the dead–if it touches you then you will die, so they have a group of men with sticks hitting them to keep them in line. Its very dramatic, kids got great joy out of peeling through the streets teaming with squeals and laughter, warning people… the way they were going on you would think the Revenant was running around chasing them but really it was just its presence, and the tension that surrounds it, not to mention the extravagant outfits! It was all very theatrical, I loved it!!
The same weekend, there were two other festivals: the Quintessence film fest, and the Agogo Dance fest. Before this post gets too lengthy, just wanted to touch on how cool Quintessence turned out to be: the venues were in open air under the stars, and I managed to make it to a night at the military base (bizarre-about 50 soldiers in sitting on the sand in rows twenty feet from the screens, and the tourists right up beside the projector), and a night at the python temple. That second night was very cool because it was more informal and local (always helps when theres no guns…). In a film about a man who lost his dog, he finally found it and the girls (9 or 10 years old) next to me started cheering and exclaiming “merci dieu!!”. They were bouncing around, so excited. The appreciation people had for a big screen event to watch different places and things seemed very novel: the last film shown was an hour long, set in ethiopia and with english subtitles so I doubt many understood it, yet the crowd didn’t thin out. 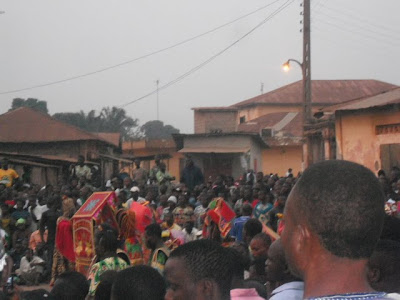 With regard to donations, total to date are $322.88 (yes!). They have been spent on three mini projects:

Bertille (grandmother of three orphans-buying 6 months of baby formula and creating a savings system): $55.16 CAD spent to date… Ive alloted about $120.00 CAD to be spent total.

Right to play equipment for coaches to lead games with youth: $59.31 CAD

So total spent so far is $239.51 CAD, (including the $64.84 reserved for Bertilles family). Thus, whats left is 83.37 CAD! The volunteer that was here in November, Jacqueline, has also raised $100 from her network of friends and family, so we may be able to collaborate on the next big thing… possibilities so far are recording a CD with the association Bidosessi (previously I had written about how we did a demo with them), and I am waiting to visit the Village Ouessè next week so we can discuss how things are going there.

Tomorrow is the Right to Play “remise des materiels”, so the coaches and representatives from the head office are coming to our office tomorrow morning. We put together some basic items that are used in many of the games: soccer balls, hoops, red and yellow fabric bands to divide teams and string. In recognition of the materials you guys funded, the office in Cotonou is bringing out T-shirts for all the coaches as well as game manuals, which contain at least a hundred games. The manuals in particular will be a great help, to us as well as the coaches! Ill put up pictures in my next post.
Be well!