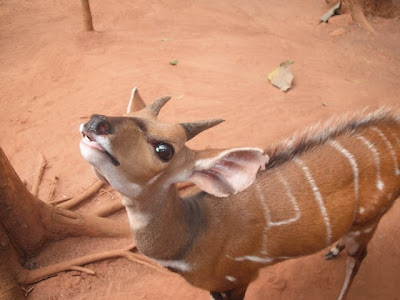 Antelopes are cute
The 12 kings of Abomey (Abo= moat; mey=inside) that reigned over a period of 300 years (1600 to 1900) were a bloody lot. Benin was formerly known as Dahomey, the name coming from an enemy named Dan, who the King Akaba told he would build his palace in Dans belly, and in the end killed him that way and buried him under a tree outside the palace. Dahomey is Dan + ho (belly) + mey (inside)!
I landed up deciding to go this week, very last minute and solo. It was fun! Doing the same trip from cotonou to abomey, the kings men went by foot and the King was carried in a hammock. When he was tired, he moved to his recliner (like a beach chair) to be carried in that. I didn’t have such luck, but the trip was a lot quicker. My lack of planning landed me in a van of somewhere between 22 and 24 people on the way there, and a station wagon with 11 of us on the return. Had I gotten things a bit arranged prior, I could have been on an air conditioned bus with my own seat for the 4 hour trip- same price!
All in all, I learned quite a bit: I had a great guide whos on break from his history and law studies in Cotonou. The hotel was very friendly and had this incredible wooded garden with an antelope, monkey and three crocs roaming about (in their confines).

Abomeys an interesting place. Each new reigning King had his own palace built in Abomey, which was accompanied 100 meters away by its own voodoo temple. They each had personal ‘fetiches’ and powers within their temples, as well as burial chambers, and ceremonial rooms in their palaces so there was no inclination to share or to pass on to the next. People were living in the 12 palaces after the kings respective deaths but since then UNESCO has emptied them of people for preservations sake, apart from two which are now the museum of Abomey. 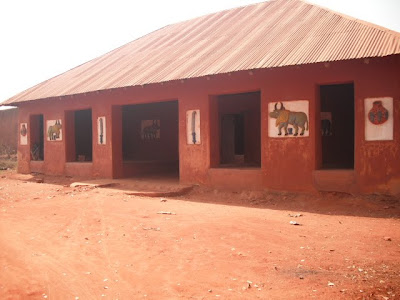 Entrance to one of the palaces

The Kings generally had about 300 wives. At the museum there was a sacred temple built as the kings grave, and when he died 41 of his wives were chosen to be buried alive in a nearby sacred temple so that they could be with him forever and always. Eep. The wives were guarded only by men who had had the equivalence (at that time) of a vasectomy so that there were no shenanigans, but shenanigans did happen and those fellows were killed in something similar to a garlic press, but instead of holes for the garlic to squish out, it was spikes.

The kings were sacred beings, which permitted them to decide life or death for their subjects. Seems like Abomey was beheading central; for example the lady who holds the parasol for the king has to keep it spinning to the right at all times. If she spins it to the left, then she must be against the kingdom and off with her head. Theres a fellow whos the specialist for these things, but there is no room for error: he takes one swing only. If he has to take two, there will be a third swing that takes off his own head. If someone wanted to meet with the King, sometimes he would demand that the person kill 7 prisoners of war to prove his courage. The museum had all sorts of gruesome original items, for example one of the Kings thrones sits on 4 of his enemies skulls. Another favourite was a skull used as the handle of a fly swatter, the swatting part being the enemies horses tail.

Outside of the kingdom, it was war, war, war. Often against the french, but also to defend Abomey and to establish itself as reigning over the slave trade. The Kings of Dahomey were the big players in the slave trade. The foreign traders (esp. french and portuguese) went through the kings to get the man hunt accomplished, and they in turn sent them elaborate gifts and bribes. The portuguese even built a king a two storey building as a ‘motivational’ gift! The trade of people always shocks me: one canon at the museum cost either twenty one very beautiful women, or 17 muscly men.
I also visited the underground village that is in the area now… there is a network of thousands of holes going deep under the earth, and each hole was surrounded by prickly bush so the soldier could pop out, attack, and be somewhat protected, carry on to another exit 10 feet away, or 4 kilometers away. Apparently now snakes and bees employ a similar strategy.. needless to say I was a bit jumpy when we were in the forest. We also went to visit a nearby village and their voodoo chief, went to the sacred forest and also saw the ‘danse des fantomes’– a voodoo ceremony in town.
Ciao ciao, Im enjoying the comments, emails… nice to hear news! Busy times back in Ouidah, 2 festivals this weekend and the big Voodoo fest is on tuesday. Work is also busy busy as I am putting together a Conflict Resolution presentation in collaboration with Mediation Services (in Wpg) for the womens associations. Also, my tranquil 7 (ish) weeks of being the lone volunteer in the house has come to an end: Marit from Norway arrived last night and we have another coming on Monday. Constant changes!