5 years ago
Libby
My Travels

In planning this trip, we decided to fly as little as possible. People fly to save time, but this year, we wanted to spend time.  So, we took a total of 5 destinations to fly to:  Canda to the Cook Islands, Cook Islands to New Zealand, NZ to Hong Kong, Korea to Japan and from Japan back to Canada. Otherwise, we have taken canoes, bicycles, ferries, busses, rental cars, trains, motorbikes, tuk tuks and who knows what else to get around.  Here in Canada we have had our own car and its been such a luxury … not to mention a dream on gas! So far, our Canadian Road Trip is just as fun as we hoped!

From the Yukon to Edmonton

I see that I haven’t written since the Yukon. We spent a full 3 weeks there, and then had 3 weeks driving back to Winnipeg via the Alaska highway and the Yellowhead highway. We didn’t take the #1 hardly at all, which Has allowed us to see places we really didnt know about. There has been more wildlife cruising around Canada than we have seen anywhere else in the world, ever.  Here are a few of my favourite wildlife pictures.
Our first stop after Whitehorse was Liard Hot Springs, just off of the Alaska Highway.  It was gorgeous, and on the way there we saw dozens of bison herds. The best thing about Liard was that you camp in the same provincial park as where the hot springs are, so it’s a simple 1 km boardwalk to get there. 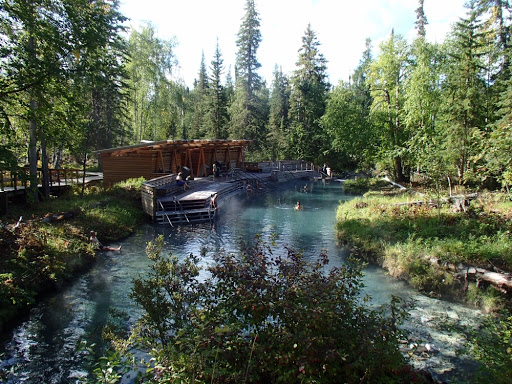 Our next big plan was to go hiking in Mount Robson Park (1 hour from Jasper), so we made our way there through Northern BC, stopping for a few nights in Tumbler Ridge Geopark.  The hike is called the Berg Lake Trail.  3 friends from Calgary joined us, including their trailblazing 3 year old that impressed us all by sticking it out in pretty lame weather.  Give her an umbrella and some rain boots and no problem!!
We spent a great couple of days with Brad’s family in Edmonton, which broke our 18 day streak of sleeping in the tent. We woke up often enough to frost in the morning, so we were okay with the change.  From there, we headed to Saskatoon – did you know you can kayak the river that runs through Saskatoon and it is so clear you can see to the bottom?! Best city. Then we journeyed on to Prince Albert National Park to rent a canoe and check out Grey Owls Cabin.

Grey Owl was a conservationist who had a ‘beaver lodge’… quite literally, a cabin where he and his wife had a few beavers that took up a quarter of it. You get to go in and see it and everything. An interesting BBC article summarizes his peculiarities: an imposter but also a leader in conservation. http://www.bbc.com/news/uk-england-sussex-24127514 .  This was one of our most memorable trips… very few people on the trail (a total of 10 that we saw on the trails or the lake); canoeing was a great change of pace, and the weather held up.  Brad and I had a particularly good day where we woke up to half a dozen woodpeckers, all around our camp. When he went to get water for breakfast, Brad happened upon a moose and its calf drinking from the lake, and once we were paddling again, we ran into a family of otters! It felt like a Disney movie!
After the canoe trip, we re-entered Manitoba for the first time in 10+ months. How exciting to drive in and say hello to Flintabbatey Flonatin! Stops to see family in Clearwater Provincial Park, and Bowsman, Manitoba were delightful.  We spent a few days in Winnipeg and got the car tuned up in order to continue onwards to Quebec via America.  Next up, we drove through Minnesota, Wisconsin, Illinois, Indiana and Michigan to get to Toronto.  Naturally, a Park Ranger in Illinois saw our IDs and said he had been to Canada once: Swan River in 1976. (Id like to say Im surprised, but…).
Since most of my long distance driving has consisted of Winnipeg to Regina, I can proudly say that my driving has really improved after getting used to hills and curves of mountain driving in BC/Yukon/Alaska, then zooming along America’s interstates. I could be going 120 km and being passed constantly!  It wouldn’t be a Canadian Road Trip if we didn’t take the infamous 401 running in and out of Toronto.
Our time in Quebec has been centred around food and rest, but still getting outside a lot. I write this from Mont Tremblant, Quebec, and hopefully I will get to writing another update before we are home at the beginning of November.
Canadian Road Trip