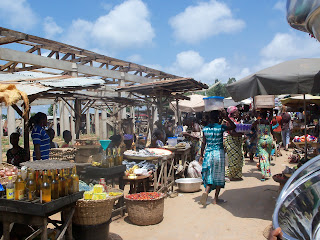 Every five days for the past 400 years (give or take..), marché Kpassé takes place. It is full of commotion, and where I get my groceries. In the days between, its empty aside from the goats that do the initial clean up, then the women sweep it for the next market day. Jobs are very gender-specific here: all of the vendors are women and kids, many of them sitting in the shelters within the marketplace or carrying food to sell on their heads. Men on motos or pulling wares to the market in trailers fill the streets. Everything is sold: clothes, food, chickens, cats, fish, yovo doko (not dorky white people.. doughnuts!), whitening creams, medicines, jewellery, school supplies, voodoo healing… its a pop-up Superstore with a dosage of quirks. The market is also unforgettable because it dictates our work life: we cant expect to do any presentations when it is Marché Kpassé, since the women are all there.
There are also many local foods and plants that I know very little about at the market. Usually if I ask what something is, I wont understand the answer; Im looking for something like “Its like lettuce” when instead I get “Its leaves from the gombo tree and you prepare it with pate rouge” to which I say “riiight.” (I dont think this combo actually exists, and gombo isnt a tree.. dont expect facts here!). One time I was going to buy this spiky fruity thing, as the women explained to me that its traditional medicine for your stomach. When they realized I was actually going to buy it, they were very kind in telling me that its very strong, like whiskey. I was even more for it: whiskey medicine! Perfect! They laughed and said no, not the kind of whiskey you like…and just told me that I really shouldn’t buy it. Understood.

The transition of food seasons is really felt here, since, obviously, whats in season is what we eat. I see the papayas ripening in the trees, the coconuts falling, or the first avocado peel on the ground… its hard to know what food is on its way, or is just finishing. I wonder if there will eventually even be broccoli and celery, but what vegetable will be lost in order to gain those?!
Aside from veggies, I have dabbled in meat occasionally but mostly fish. However, the most exciting things I’ve eaten have been from the former: a chicken foot– it was like shaking a hand while gnawing on its’ wrist, and “Agouti” which is a large rodent, and quite the delicacy in West Africa. Comparisons have been made to describe it: Ive heard its like a cross between racoon/rabbit/possum/big rat and others, but most memorable is that people waste no part of it… its not uncommon to eat its poop!

If that doesn’t whet your appetite, I just dont know what will.