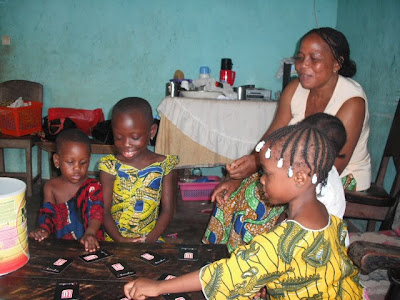 I had my last visit with Bertille last week, it was delightful. She recieved the rest of her baby formula supply, and I brought some cards to play that “memory” game where you match the images that are face down. We landed up with quite the gaggle of little girls all rallying around this game! It was a nice way to say goodbye. She now has 17,000 CFA in her savings, and will continue on.

After spending the afternoon processing tomates with the women of Ouessè, a cord on the moulin snapped! So, more repairs. There was a bolt that had gone unnoticed and was slowly wearing the cord down til it snapped. That came to 14,000 CFA and now they are good to go. 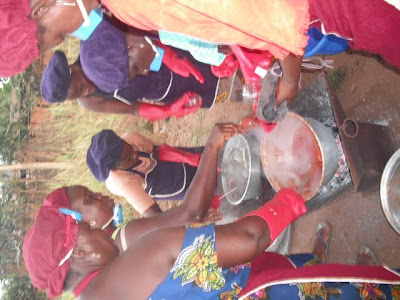 The association Elavagnon (fon for “there is hope”) in the village Godonoutin, is about 20 minutes from Ouidah. They are a group that earlier this year our NGO helped with starting a beekeeping project. They just had their first harvest, which will happen every six months, and much to their delight the honey sells like crazy as many people take it for good health. Since about a year and a half ago, the association has been collecting 50 francs (about ten cents) from each of the 50 members every market day, which is every 5 days. They have been saving up to buy a plot of land which costs 250,000 CFA so that they can start up a little shop, and have a central hub where they can hold meetings and do their other transformation projects (making red oil, and garri which is a staple food here). What patience! With the remaining donations, we were able to give them 65,000 CFA which completes the cost of the land they were looking at. They were very excited, as the cost of the land had been rising as time went on, so the nature of their slow and steady saving was not seeming to be getting them any closer! Now the money theyre saving can be put towards building.

The remaining donations are being given to Remar, a spanish organization that takes in street kids and orphans, and also identifies addicts and sends them to a rehabilitation centre in the north. They have a new home that is starting up in Ouidah, which currently has five kids. They are struggling at the moment: the staff and kids sleep on cardboard and my housemate Matt regularly goes canvassing in Cotonou to raise money with his co-workers.

So that is the donations in summation!
Thank you all for participating and your generosity!! It is a rare thing here for people to recieve financial help without even asking for it, and all of the recipients have expressed very sincere thanks. I have one last donation that has come in, but since I cant make it to Cotonou to go to the bank (flying out of Accra, Ghana), that will be spent in South Africa!
Monday was an exciting day. I went to visit the Refugee Camp with a friend, and ate frogs legs! And met the ex president of Comoros! And got in a moto accident! Four stitches later, I have a nice and wobbly walk. It could have been much worse, so Im thanking my lucky stars.