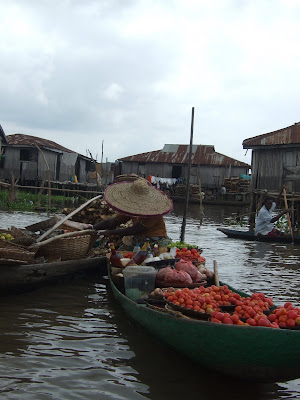 To explain my last title, when I introduce myself to people here, they are usually confused about my name and to make sure they heard it right, they say “Libby… comme le pays? Libye?” and then jokes about finding Qaddafi ensue… Im getting quite good at this intro!

I cant believe its my second week here already, time is passing very quickly. This weekend, Amber and I went to Cotonou (the city that I flew into) and Ganvié, a village on stilts in a lake. It was very exciting and surprising how different these places are from Ouidah. To travel between places, we took a series of taxis. Early saturday morning, we walked to Marché Kpassé where there is a main road off the market, and several cars. We quickly found someone who was going to Cotonou for 600 francs (just over a dollar), so we got in. The car was full with 5 of us in it, but we still werent leaving. Two more people squeezed in, and voilà! Were ready to go, nice and cozy.

We only lasted about six hours in Cotonou, as the main event this weekend was to get to Ganvié. There are no ATMs in Ouidah, so we needed to get money from the city.
Amber and I were excited about the air conditioning, the menus in restaurants, and the insane amount of moto traffic. Apparently in moto taxis alone, there are 80 000 in Cotonou. Going to the city made us realise how calm Ouidah is, which I had previously thought was busy. Now Ouidahs two lanes of traffic to run across pales in comparison to Cotonou, with four lanes each way!

We stayed Saturday night in Ganvié (pictured). It was so relaxing there and very much a fishing village. By contrast to Cotonou where french was very widely spoken, Ganvié mostly uses Fon. French is whats taught in school, but it is still the business language here and there isn’t as much of a use for it in many villages. The kids learn young to row around with either bamboo sticks or paddles, as boats are the only way to get anywhere. Even the market is by boat! Régis took us around the village, thats the boy in the last picture. 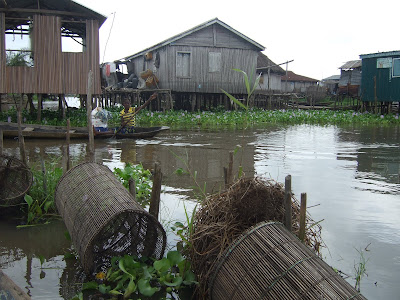 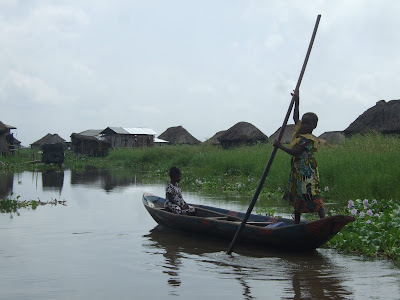 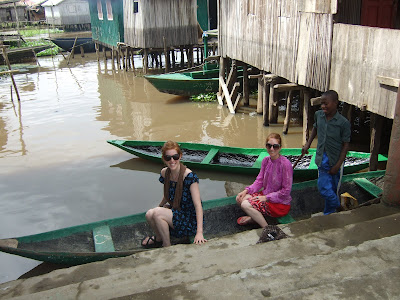